It looks like the 1986 NB50 aero has the vacuum nipple on the intake manifold and before the reeds so the motor could only pull "vacuum" by the up-stroke of the piston and in my opinion, having very little to do with the crankshaft seals. The seals very well may need replacing.
Have you done a compression test?
Honda Elite SR
Honda Elite-Dio ZX

Hi, yes the vacuum nipple is on the intake manifold berfore the reeds.

I just managed to do a compression AND a vacuum test. I have a Mityvac pump that does both and has a dial.
The engine is air tight, no problems.

So now the only culprit I can see is the carb.
I double checked and opened it again. All the circuits are free of obstruction. I put the floater in some gas and it does float.
I let the carb fill up with gas and then tried blowing into the gas nipple : the floater blocks ok.
I drained the bowl and measured 24 ml of gas.

Tomorrow I'll go for a ride and measure the gas left in the bowl when the engine stalls.

My Honda shop told me he had and old SA50 Vision (1988 =>) that we call Met-In here. It's the model that followed my Aero 50. It may have the carb. I looked on CMSNL webshop (they have the parts view) and the carbs look alike. But the part numbers are different...
I want to try his carb and see what happens.

What could possibily be wrong??? Maybe the carb is old and has a crack somewhere inside that calls for air and when underload make my mixture too lean to work???

Would someone here have a good used carb they're sure of to sell if I needed one?

My friend wanted to give me a Dellorto 15/15 he has. He can make me an adaptor plate (he has lathe at home) for it.
But I want to keep my scoot as close to original as possible.
That's why I don't have any sports exhaust or BBK.

An original OEM carb from Honda costs 220€!!! That's some serious cash...
I've seen non-OEM ones on Ebay and they look like sh*t when doing close up look...hence the 20/30 bucks they're worth.
My riend told me he'd bought one once and it never worked. He ended up buying a Dellorto (the one he'd give me).
"TT"* and me : http://www.hondaspree.net/phpBB3/viewtopic.php?t=24745
* "The Thing"
Top

Here are some exploded views if someone wants to check something out :
My Aero https://www.cmsnl.com/honda-nb50m-1985- ... 7UgEtczbIU

It's a bit different because oil feed is on the carb and not on the manifold, the choke system is manual and not electric...
I managed to put it on the bike anyways. Kept my throttle slide system and my needle for convenience.
The main jet is 70 on the SA model so I put my 80 in this "new" carb.

BTW :
I cleaned the carb before mounting it as it is thought to be sitting since 1996 on this bike in the barn...
There was some oil left in the carb but, overall, very clean inside. No deposits or whatever.
Too bad the guy is so expensive, I would've bought the hole engine for 50 bucks (but 4 bolt manifold...mine is 2 bolt) to have spares, it's got the kick starter and electric starter just like mine. Don't know if all is compatible.

I really think it is lacking gas. But WHY???!!! It always worked before and I didn't change anything meanwhile.

Tomorrow, I will do a test with the 70 jet to see if things worsen. To make a point.
Then I'll put the 80 one back in and put the air box back on too (I don't have the air box on to make it easier to tinker).

Could someone indicate me an Ebay shop that could send me 2 main jets quickly so I could test an 85 and 90 jet?

Air box must be installed or it's going to be running lean. Put back on each time. Be sure filter is oil damp.
Honda Elite SR
Honda Elite-Dio ZX

Ok, air filter is oil damp. I'll put the air-box back on but I was having same problems the other day with or without it.

Do you think I should go for it?
The design isn't exactly the same, but the dimensions are ok.

Mine are like these ones and are threaded all the way long : The ones offered in the box are like these : 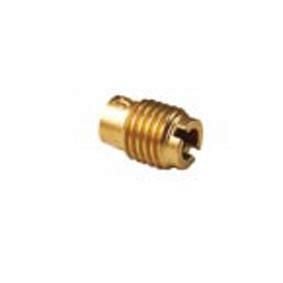 No one has a clue to what is going on?

Hard to say for sure but these are what I use in the sa50's in usa.... https://www.treatland.tv/honda-EXPRESS- ... in-jet.htm
Honda Elite SR
Honda Elite-Dio ZX

They look alike.
They are more expensive in the US!
A shop sellong these jets in France specifies that they don't guarantee that the numbers on the jets are respected. That is a clue to me that they "may" be selling "sh*tty" stuff. I'll avoid that shop but...everyone else has the same jets on their webshops (same pictures).

Some chinese stuff really suck sometimes so I'm trying to be carefull. I don't want to add other problems to this carb problem I have.

Asked a lot of people around me, and two 2 stroke specialists, and no one seems to have an explanation on this phenomenon.
If I ever find out, I'll be the Boooooooooss!
"TT"* and me : http://www.hondaspree.net/phpBB3/viewtopic.php?t=24745
* "The Thing"
Top

So tried the scoot today :
Put the air filter back on
Carb is the SA50 one
Main jet is 80 (the OEM one that was on my Aero carb)
Needle is at 3rd groove (so needle is at highest point possible), OEM is 2nd groove.

Everything is working as it should, small bit of straight road : 60 km/h easy and felt like it wanted a tad more. Just like usual.

I notice that I changed 2 things :
Needle setting
Changed gas last night going the gas station.
I had ALREADY flushed and changed gas, but I had taken it from a jerrycan. Maybe the gas station gave me some fouled gas last time I filled up the jerrycan and the gas in the scoot when I restarted it a couple of days ago was too old???

I will now put back my OEM carb with the airfilter, the 80 main jet, leave the needle at 3rd groove and see what happens.

Questions :
I know you guys recommend an 82 main jet (or am I mistaken?), I have ordered this :https://www.la-becanerie.com/scooter/ca ... leurs.html
I will have a vast array of main jets.
Should I try putting the needle back on it's 2nd groove and then try different main jets starting from n°82 until it gets a good running mode?
Because leaving the needle on 3rd groove is changing the enrichement of gas under progressive throttle slide opening (but it does work smooth as it is now) and N°80 jet seems to be too lean, I could now compensate by putting a bigger jet?

Some thoughts.
Any knowledge shared will be appreciated.
"TT"* and me : http://www.hondaspree.net/phpBB3/viewtopic.php?t=24745
* "The Thing"
Top

Well I did stay stranded 3 times again with the old carb.

So I finally hope all is well now...

Putting back the old carb in still gave me problems.

Long story short : diagnostic was good = not enough gas coming in.
The solution was not correct = make more gas come in by raising needle.

2 problems were preventing engine from revving high :
1) The vacuum tube (OEM 32 years old part...) was hardened and was very slightly leaking. Didn't open enough to let gas full flow when WOT.
Fixed that and engine worked better. But still not good enough.
2) Took my external Mann WK2110 gas filter off and put a fuel line directly from petcock to carb. No more WOT problems and riding nice. BUT (!!!) now a problem when idling as it is sometimes high, sometimes low. PITA!!!

I had already checked the float valve and it closed well. So I thought. Seems like gas was able to seep a bit and level in carb bowl wasn't constant!
Put the float valve from the "new" carb and everything is now stable and working ok.
Compared both of them and the faulty one looks veeeery slightly used. I had to have the "new" one next to beleive it.

I replaced all the fuel and vacuum lines AND put screwable clamps to be on the safe side as time goes by.
The gas filter is on order.
I will also replace the float valve by a new one because I don't want to rely on a used part for this kind of stuff.
Also on order : a gasket kit to renew all the ones on the carb (to be on the safe side again).

The carb is now functionning with needle at 2nd groove, 80 main jet.
Next week gaskets, float valve, gas filter and set of jets (I'll try n°82) will be home and I will put everything in order and don't want to hear again about it for a couple of years!
"TT"* and me : http://www.hondaspree.net/phpBB3/viewtopic.php?t=24745
* "The Thing"
Top

Good to know that you've found the issue, and that you've managed to keep the original carb. It gives me some pointers about why my '84 Vision was having similar, but slightly different issues earlier in the year. I may try a larger main jet to see if I get a bit more uphill WOT power.
Top

Fuel filters on scooters can cause a whole host of issues. There's one in the tank already and you're best just letting it do it's job.
Admin, Hondaspree.net

Hi noiseguy,
Yes there is a filter in the tank. But in the other filter I have outside the tank, I found some dirt. I prefer to have it there than in the carb.
I know that adding these filters adds often problems, but I really don't want to clog up the carb and its tiny circuits.

I'll just have to change it more often. I'm planning on a change at each plug change. I ordered 2 of them to have one at hand.
"TT"* and me : http://www.hondaspree.net/phpBB3/viewtopic.php?t=24745
* "The Thing"
Top

Hello!
Back on line.

So I finally hope all is well now...

Putting back the old carb in still gave me problems.

Long story short : diagnostic was good = not enough gas coming in.
The solution was not correct = make more gas come in by raising needle.

I also took out the petcock and saw that there was A LOT of dirt (not rust) around the filter. Cleaned all that too.

A couple of months later, TT started to malfunction. AGAIN.
The idle was lowering itself progressivly. I only rode 1300 km since the big carb check up in october 2018!
To make it idle I had to screw the gas richness screw completly. So too much gas coming in.
What the F word...
Took it apart so many times...just got tired of it and forgot all about it for a couple of months (6 or 10...can't recall, just forgot about it).
Someone gave me a very old moped so I took care of it, made it reliable (not easy...) and have been riding it since. That kept me busy enough.
Check it out :

Time for my annual moped rally is coming again (end of october) : let's see if I can get TT running again.
After a lot of thinking and tinkering it was clear that too much gas was coming in (black spark plug and having to close the gas richness screw).
I took the float needle off (yeah...the new one) and put the one on my spare carb in : perfecto!
So the new float needle is sh*t. It only worked for a thousand kilometers or so.
What is this???!!!
It is not a OEM part. Maybe explains things.
I'll stick to the OEM part on taken on my salvaged carb for the moment. These float needles are sold for 35 bucks + shipping here! What a ripp off!