Does your Spree/Elite already run great, and you're trying to make it quicker/faster? Need a monster motor swap? Discuss your ideas here.

I have read of different ways to do things here, dio headset swaps are a little different. The threads and headset mount up differently, and Bonesv has a great writeup for that.

This should work on an elite, if you want to use the stock headset or naked bar. SA50 stems and NB50 stems are the same from the bottom race on up. I havent tried it, but Im sure you could swap them if you wanted to for some odd reason.

I picked up a used Honda Metropolitan stem for super cheap. My buddy and I split a part out on an SA50 and I basically got whatever I wanted but the plastics. At first it was just the motor and the wheels. Then i started using parts for this build. The bike Im doing the swap on has SA50 Wheels, larger front brakes, key-set, brake cables, speedometer cable, engine mount, engine, grab bar, tail light.... all can come over with a little bit of tweaking.

Now were going to take the SA50 stem and swap the tube over to the Metropolitan stem. The Met stem is shorter and the threads are in the wrong place. The race (which is pressed on) is also different.

I also got a set of Hella SuperTones for 10 bucks on Woot, so well see if they make the final install

I had a friend hack off the bottoms measuring the same distance up. Apparently it took a while and the steel tubes are pretty tough. Reassuring to hear. He sleeved the inside of the stem, beveled the edges, and welded the two stems together. 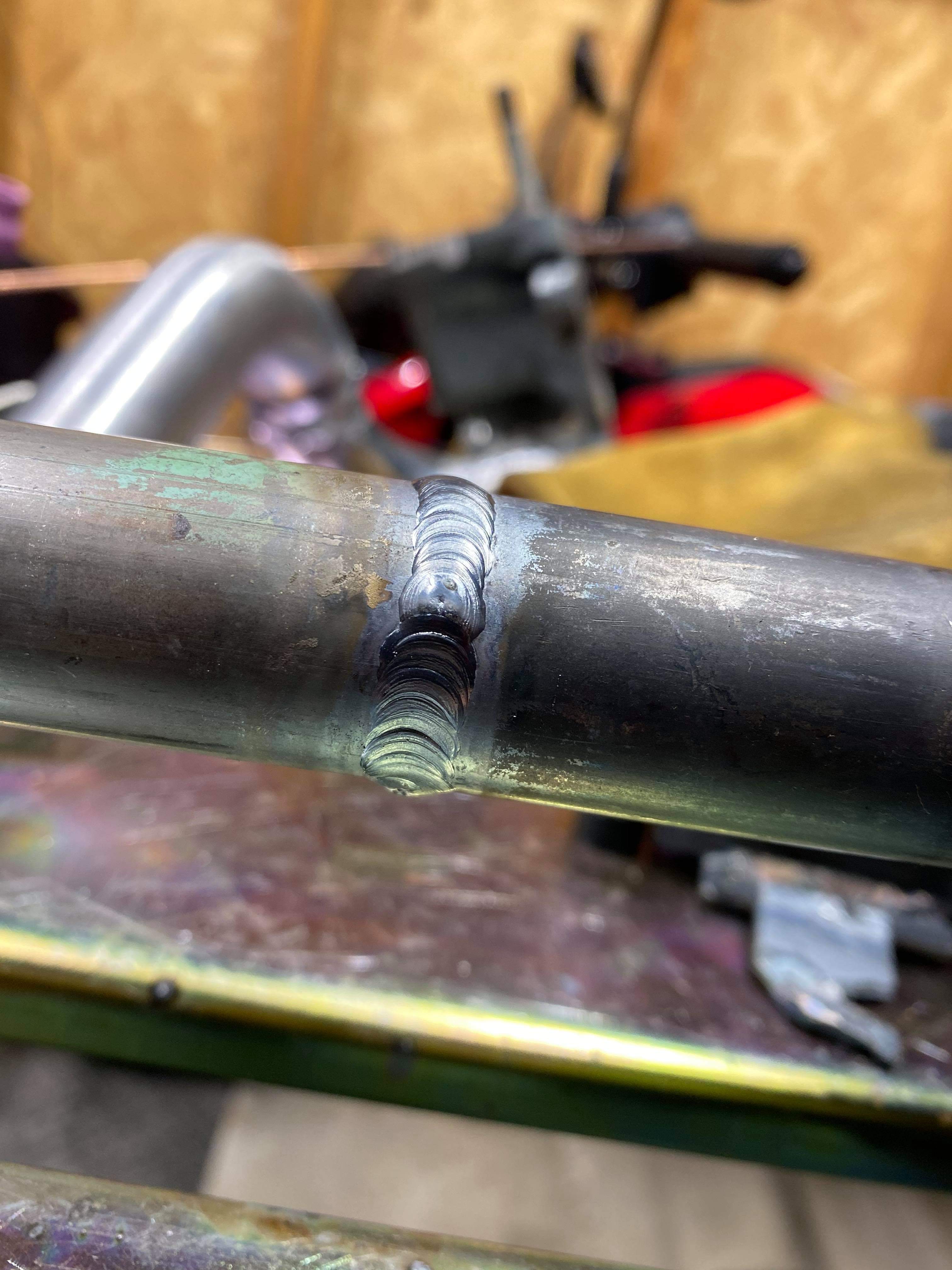 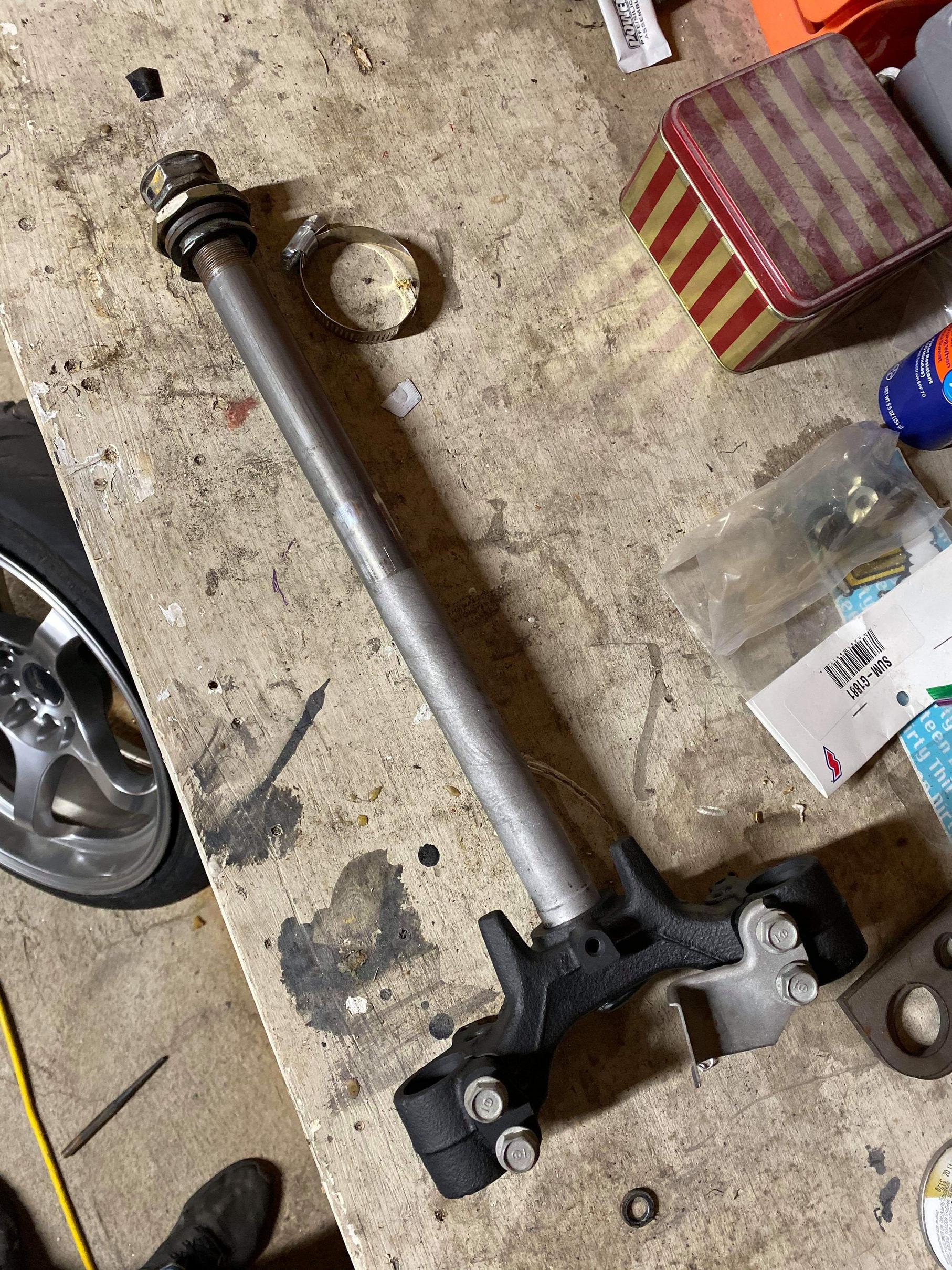 Cant tell you how happy i was with the outcome!

Now I did not test out the Met stem at all, and I could not find anyone who has done this before. I just knew the SA50 stem would work. Most people doing these things end up cutting out the glove box.

The first test fit, and IT FITS AHHAHAHA IT FITS. No cutting

And with the panel on

Since all the races seem the same as the SA50, I decided to order some bearings for them. Loads of older bikes use them i guess. The Aero had loose balls and I wont stand for that.

Ive been kinda struggling on what to get. I wanted to buy a kit, but then I didnt. I got some kymco calipers from a fellow on FB in taiwan. He sent me a ncy rotor as well but im not sure if it will work. Its 200 and i think the kymcos were 180mm. Caliper came with a brake line and newer pads, so one less thing to buy.

Wanted to do naked bar, but my wife thinks I should keep the oem headset, and that was enough for me to lean back over the edge. going to cut a hole for a brake reservoir.

Got a cheap master with good reviews on amazon.

Bought a pair of oem AF35 wheels on buyee as well as an axle, speedo, and spacers in a separate auction from an af34/35

I did some measuring, the Metro stem hangs down a bit, where the dio stems are recessed. Thats why most people cut glove boxes. From what I can tell forks come in Lowdown 300-318, Slammed 330, and stock is like 400 i think. 330 is about 13 inches. I went with that route, so that when you account for the droop on the met stem, it should be very close to stock height.

I grabbed some PG forks from VT Cycles, they are 330. Ive heard those forks can be rough but well see.

I need to find some new haters...the ones I have are starting to like me.
Top

Im going to update later with some step-by-step business and parts, but for now you all can look at this.

Also my ZX wheels should be here when I get home later.

So I have some updates. Ill start off with this message for anyone following after me. There are a few kits coming from taiwan with a 2.15 wheel setup. You should just buy that kit lol. I went back and forth on piecing this together vs buying a kit. I think the caveats, combined with shipping on little parts here and there will come out more expensive and with less new parts. With that said, I am not doing this to save money or make money. I knew this was going to be an expensive money pit.

You should also know that ruckus kits with front wheels will be too wide. You need RPM knock offs or you need OEM DIO ZX wheels from japan. you might be able to get 12inch dio wheels from taiwan as well.

My wheels, axle, speedo, and spacers came in over the weekend. Shout out to our mailman for doubling back to see if we were home later!

I think I am going to have them walnut blasted and repaint them. I considered having them powdercoated, but thats going to be a lot of money sunk in.
Or maybe I will, who knows I change my mind all the time...

So I noticed that the brake caliper I got from a taiwan hookup, does not match the rotor and its a little spent up with that note also. I was kinda mad about it. You can see that the 160mm DIO rotor fits perfect. the 200mm NCY does not obviously.

I contacted the guy, he said there was a bracket missing and that * send it, I also noticed the pads were chewed up, hes gonna send new ones also. He mentioned that he ran this setup, so im kinda thinking the adapter is for 220mm as the pads have a groove with 1cm blank. They also ground down the back of the caliper to fit on the dio wheels. Now that I am taking a second look at the disk, it looks like only halve of it has pad residue. Ill let it live and just grab a 220mm, they are cheaper for some reason anyhow....

Next next issue is the bars. If im keeping the stock headset, Ill have to run a master, and the levers are welded to the bars on the aero...

Not perfect, but itll do.

I got a 7/8 master from amazon, should be here today.

My cardboard list in the garage tells me i still need to do/get:

I talked with Carter at SSS and he mentioned that hes done this conversion. Apparently the speedo cable needs to come up the middle because of how the headset is placed. I have ruined the ability to do that save for maybe drilling a hole in the side of the stem. I am still thinking about if i want to run the speedo gear for a cleaner look or if I want to just have a spacer cut out.
1986 Aero White -- Stock With Keli Var
1985 Aero Red -- Af05 Malossi BBK + Keli Var
1985 Aero Red -- Af16 Corsa / Fabrizi Pipe / Polini 24 PWK / Athena Stuffer Crank
Top

I have had trouble getting the NCY grips to fit with the plastics on, I might find some way to mod it, but not real sure at this point. Ordered some cheap red ones on ebay, hopefully they dont look too awful.

I started the weekend off by attempting to strip paint off the dio wheels and my sym cvt cover, but that took a little longer than expected, so I figured I would just go ahead and work on the bars. The master banjo sticks out too far for the light bracket. I probably should be doing naked bar, but I wont give up yet!

Trimmed the mirror mount for a little more clearance

Start/Stop buttons get in the way of the master bracket so i trimmed the area around it. I think ill be able to just zip tie it.

You can kinda see why the NCY grips wont work here

My wife was giving me * that the bike wouldnt look like an aero anymore, but i think its still gucci

The rest of the panels are clapped out, but this bike was going in the trash before i got the itch

I also got my new 200mm adapter bracket for the caliper in the mail. The thing is so large, i have to mount the caliper to the bracket before putting it on the forks.

Factory bracket has an 8mm standoff and the new one doesnt, so I am ordering some spacers

Since I am giving up on the speedo, I figured I could just turn down a stock aero spacer. I measured needing 27.5mm between the fork and the wheel. The spacer i got with my af35 axle already has the wheel being centered.

turns out dyno scooter had one exactly that size *! Apparently I got the last one.


Paint came off the rear wheel and sym cover just fine, but the front is stubborn. Its too cold to paint anyway. Hopefully next week or so itll be rolling at least.

another thing to add to this is the zx and other japan scooters have the neck bearings caged. not loose like our us scooters. the caged neck bearing will fit in our US cups and work just fine. and theyre easier to keep track of than the loose ball bearings.
Top

harleyracer59 wrote: ↑
Thu Feb 27, 2020 8:44 pm
another thing to add to this is the zx and other japan scooters have the neck bearings caged. not loose like our us scooters. the caged neck bearing will fit in our US cups and work just fine. and theyre easier to keep track of than the loose ball bearings.

I ordered Sa50 bearings that were caged, the part numbers for the cups were the same as the aero and they seem to fit perfect. I would absolutely suggest that anyone else doing this gets caged bearings x10000000. I guess the olden days didn't have the tech haha
1986 Aero White -- Stock With Keli Var
1985 Aero Red -- Af05 Malossi BBK + Keli Var
1985 Aero Red -- Af16 Corsa / Fabrizi Pipe / Polini 24 PWK / Athena Stuffer Crank
Top

cool. the caged bearings are so much nicer to keep track of than 36 individual ball bearings. I think you and I had talked about the bearings in text. but I didn't see it here so I thought id add it.