Progress on the Xingyue XY150ZK (A.K.A. AutoMoto)

I don't remember how I found it, probably the Wayback Machine, but I have an owner's manual. If you want a copy let me know and I'll send it via email. I can't attach a pdf to a message.

Thanks for the links
Top

Thanks for that link. I didn't have the owner's manual.. much appreciated. I'm sending you a private message. At the top of this page is a link called Private messages. Please click on that link to read my message.. thanks!
Top

The last good capture on the Auto Moto website is January 29, 2016. I'm not sure when they folded but that should give you the most up to date information. I'm really trying to find good pictures of the optional rain guards. I plan to ride until snow falls and the added protection would be nice. I have ridden in temps as low as 18°f ( -7.78°c).

vintagegarage wrote: ↑
Sat Sep 22, 2018 3:18 pm
Yes, I can tell by the photo of your Auto moto in the trailer that you have the narrow version, with taller and thinner rear tires and better rear wheels. I think that is probably preferred as it may also have better brakes.

I just got my new rear tires mounted so I can verify that the rear brakes are probably the exact same size as the small wheel version. The brake drum is integrated onto the wheel. The ID of the drum was about 4.25", I should have taken a picture. Maybe I'll pop one off for a quick photo of the inside. My new tires are a bit over-sized so removal is a bit of a pain. I went from 110/90-10 to 120/90-10 to get a more aggressive tread pattern. The photo below shows the outside of the wheel, the center section is the drum.

At some point in their production, I think these scooters got a brake master cylinder on the left grip similar to the one on the right grip that worked a rear disk brake or brakes. I was hoping your's had the rear disk brake(s?).
Top

I will be starting my own thread to track my progress instead of hijacking yours.
Top

I tried to sell the Xingyue before I left on my fall trip to Japan, Korea, China, Taiwan, and the Philippines with no success. All the potential buyers wanted it because they thought it was a mobility scooter, so I didn't sell it to them. There were also two big defects left to fix and I was really looking for someone who would fix the problems. The rear wheel hop was unacceptable, and the front fork seals were leaking shock fluid on the floor of the shop. I decided to replace the brand new out-of-round tires that I bought directly from the manufacturer in China at relatively great expense, with two original used wheels and tires with under 500 miles on them that I bought from the man in Colorado who sold me the seat and windshield wiper arms. I installed the used tires and wheels when they arrived and the rear wheel hop was mostly gone. The Xingyue was now somewhat fun to ride, whereas before it wasn't. Since it was so much improved, I decided to replace three other parts with used parts from the same source. I bought a used original CDI box to replace the "racing CDI" that was installed when I bought the Xingyue. With the new to me used original CDI box installed, the idle is now much smoother, and top speed and acceleration is still very good. I also replaced the yellowed and badly checked headlight assembly I had with his nice used one which looks brand new. Lastly, I replaced my rear shock with his rear shock, and now the only rear wheel hop is slight and just under hard braking from 50 mph. Once I removed my old rear shock, I could see that the top rubber bushing on my old one was pretty tired, as the top bolt is no longer at right angles to the shaft. I still haven't fixed the oil leak in the front forks, and the chrome on the forks is badly pitted. The good thing is that enough oil has now run out of the forks, so the scooter no longer makes a mess on the floor. It is hard to tell that the front forks are low on oil, as the scooter rides fine and there is no front wheel hop.

For now, I'll keep the Xingyue and put it in regular rotation and plan to ride it twice a month going forward.

In any event, here are the latest photos: 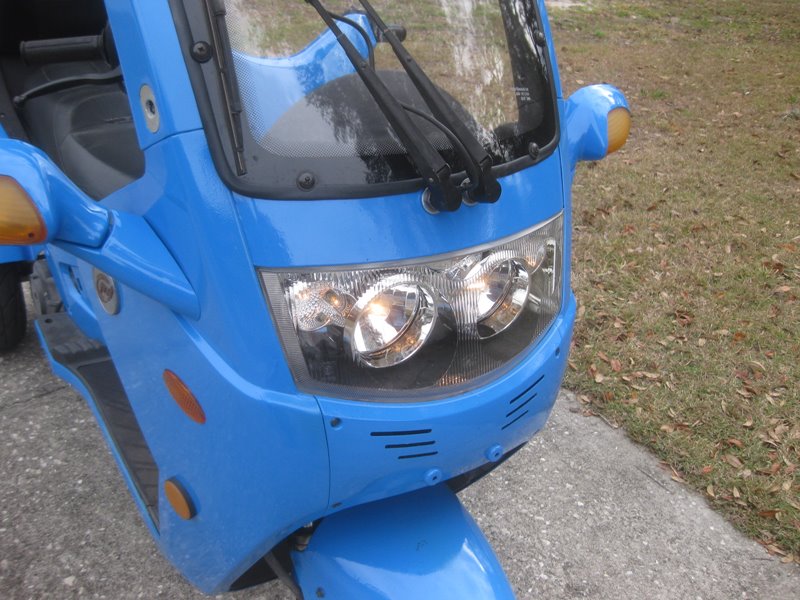 The top bushing on my old rear shock was not very proud: 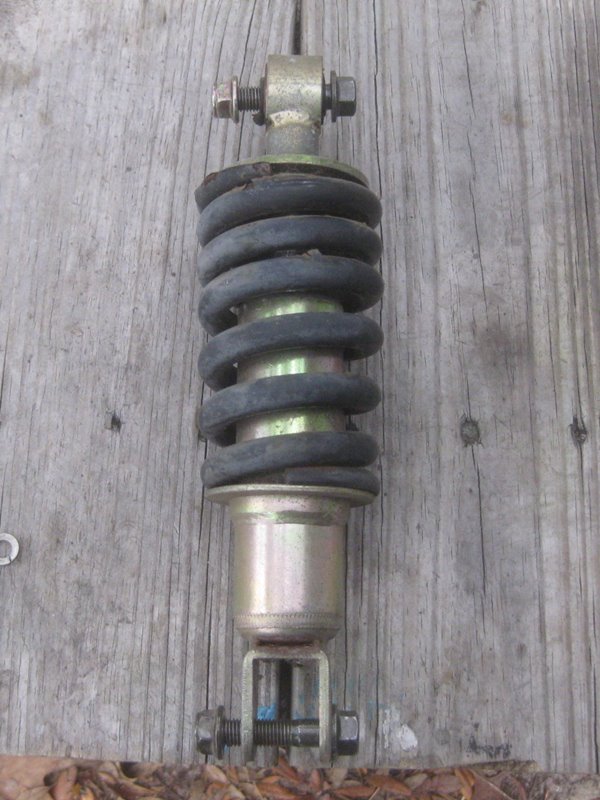 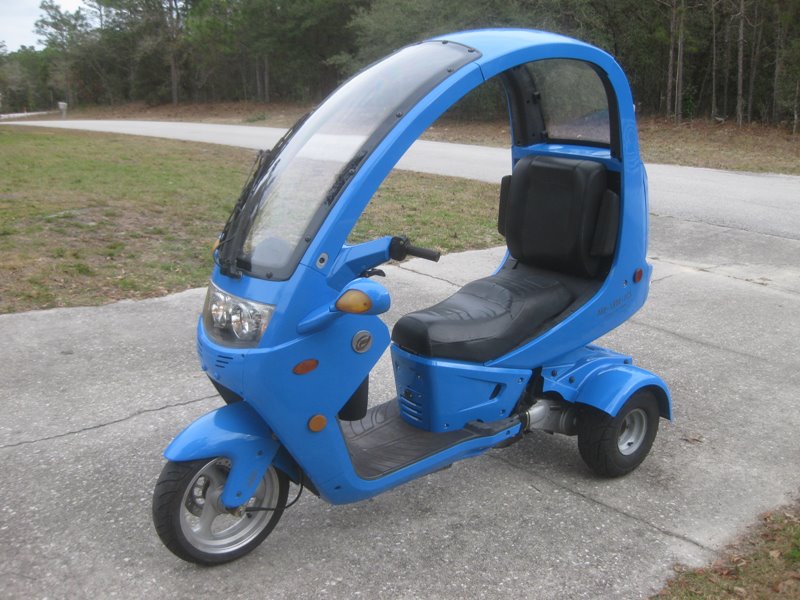 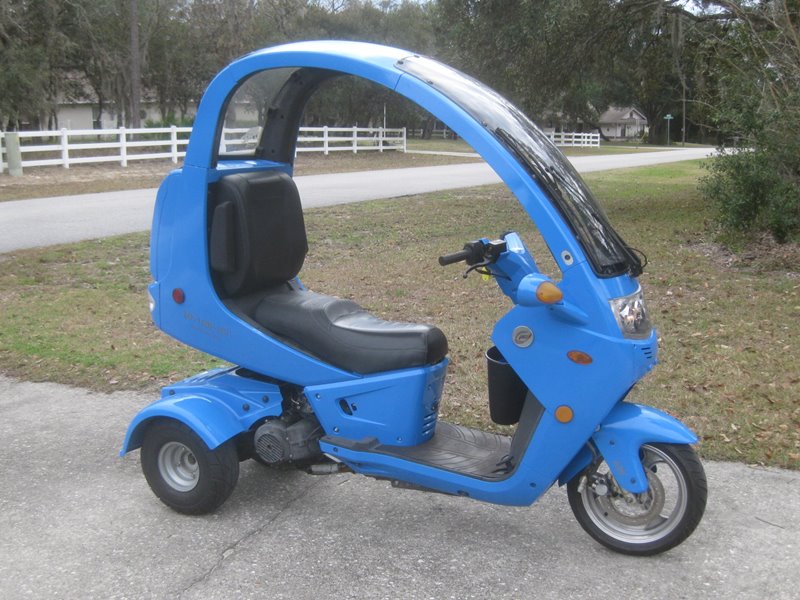 Good job on this one! Leave it to Vintagegarage to successfully restore an obscure Chinese 3 wheeled roofed scooter! Your garage looks like a scooter museum btw
Top

I bet I can roll that thing thru the grocery store as a mobility scooter and no one would say anything haha.
Top

I see there is one for sale in Jacksonville this week if anyone is interested. This model has the narrower rear tires and narrow engine cover, and looks to be in better shape than mine..