I am using the down time for a number of overdue projects. I installed JDM rear footpegs on my blue 2019 Super Cub. That was a two 1/2 day job, as I was very careful to make sure that the holes I needed to drill in the factory mounting points in the swing arms were in exactly the right place, and exactly horizontal. I went through seven 1/8 drill bits drilling the four pilot holes, as the steel was tough. Then I drilled out each hole in several steps, until I finally was able to drill the 17/64 holes for the m8 tapping. Then I worried that I'd break off the m8 tap while tapping the four mounting holes. I worked about one thread at a time, backing off the tap, blowing out the hole and the tap, and then doing one more thread, and managed to do all four without screwing up. I did the left side first, as the right side was a bit more difficult as the step bar and muffler had to be removed to get to the mounting points. By the time I started on the right side, I was more practiced and had been to Harbor Freight for another dozen 1/8 drill bits, and so the right side actually took me about an hour less time. The whole job took me about 8 hours, just because I was working slowly and trying to be careful.

Here are photos from coolpixer on the Adventure Rider forum when he did the same job a few months ago:


Today's project is to change the headlight bulb in one of the Tomos Mopeds I am trying to sell this week. I bought them as a wedding present for a buddy of mine and his financed, but they have since gotten dis-engaged.. LOL see:
https://ocala.craigslist.org/mcy/d/hold ... 14746.html

After that, I am going to do a Spring Cleaning in the shop. I have two complete black Sprees that I stripped out a few years ago, and one black SB50. If anyone feels like coming by the shop, they can have all the SB50 parts for free, and perhaps all the Spree parts if you have a proven use for them. One of the Spree engines is a kicker, the other not. None of the three still have frames, but most of the rest of the parts are there. I also have a driveable 1984 Gyro with no title, and missing a lot of parts that could be free to a good home. Also have a second 1984 Gyro motor, a 1983-4 junk but complete NB50 engine, and a bunch of other junk.. send me a PM if you'd like to come over and let me know what you need.. prices are free to a good home.

Here are photos of the Super Cub fitted out for carrying a (pretty small) back rider:

and for carrying supplies: 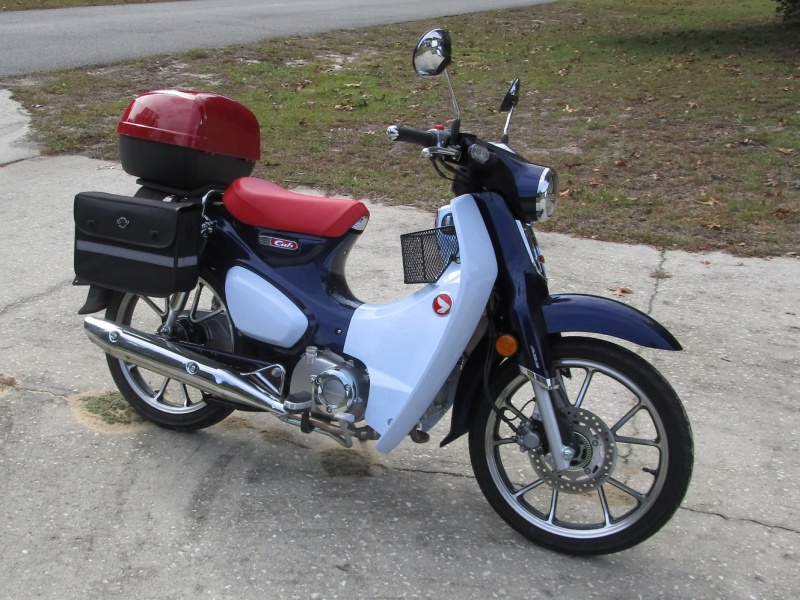 Hope you are well these days of uncertainty.
I just put the first bike on the lift today.
Decided it was time to do the big clean-up on '84 Gyro.
It has a lot of oil and dirt build-up having been owned by an '86 lady when I bought it.
Took some pix, but the camera is still out in the shed....post'em later.
Hi Wheeelieman-111

.Hope you are well too.!

*Last photo is the entire remains of air filter. and baffled to understand why, but this Gyro runs a cool 35mph on flat.

Urban Express...2k miles...Probably starts first kick with some ether.
Has been sitting a couple years.

I need to find some new haters...the ones I have are starting to like me.
Top

Coolio...I'd like to think I've earned my reputation.
Spotted this one 3-4 weeks ago while riding Helix through backroads,
before the Corona hit, so I've waited until now to go grab it.
I worked a deal that day, and the seller was glad to wait for a while
since he had no intention of selling it until I asked.
If my neighbor wants it for his 16 year-old, that's where it will probably go.
I like'm, but not really needing to HAVE one, ya know? Paid $80...whatta ya gonna do ?